As warned previously, the covers of Cirsova magazine are worth a look.

We're going to punt on the special edition cover featuring a pair of GamerGate heroes in a classic Frazetta pose.  That was a nice nod to the troops on the front lines of the Great Meme War of 2016, but it's worth it's own discussion.  Also, it doesn't really fit my thesis, so like any good climate scientist worth his grant money, I'm going to just ignore that pesky little data point.

What you're looking at to the right there are the first four covers of Cirsova Magazine.  Initially, I was little disappointed to learn that the same artist would be preparing the cover for the fourth installation of the magazine.  Then I saw the cover he did and realized I didn't know what I was talking about and maybe I should keep my damn fool mouth shut.

That never stopped me before and it's not going to stop me now.

Purely from a branding perspective, this is a clever move.  Cirsova magazine has a distinct look to it.  The bold colors and the stark impressionistic style all serve to distance this magazine from its more staid competitors.  You've got conflict occurring in each one as well.  Only in the case of the magic thief sneaking through a wall do you have a cool character looking cool, and even he is in the process of doing something.

Now take a look at the more recent covers of the sort of magazines you're likely to find in the box chains:

Let's just take a moment to enjoy the fact that F&SF over on the left features a lonely person surrounded by multiple cats.  Give them credit, they know what their audience likes and they are going to give those spinster cat ladies what they want good and hard.

Those three covers are all dull and muted.  Only the woman fleeing through the woods features any action of any kind.  The middle one is nothing but three pensive faces looking pensively off into the distance.  This is the sorry state of the mainstream fantasy and science-fiction world today.  Cirsova is right to do everything different that it can.

Of course, this being November, maybe the October issues of each magazine are just naturally muted and dark.  October is the spooky month of Halloween after all, so let's look at a survey of Asimov's covers, to get a better overview of what to expect from them.  Here is the top row of results from a Googel Image Search for "Asimov's Magazine Previous Issues": 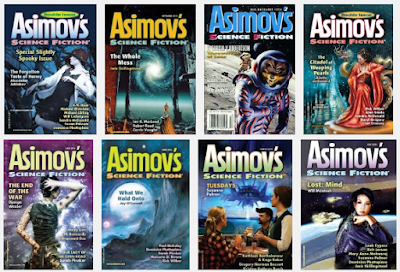 There are nine people shown. Five of them are sitting down.  Of the fours people standing, only one is actually moving, and that figure is tucked way off into the back.  One of the covers is nothing but a landscape. Thrilling tales of adventure more certainly do not await.  This is a sedate magazine filled with people doing the same things they do in our world, only against a backdrop of stars and castles.  There's no last minute changes to the hyper-drive coils.  There's no fight against a scaly natural disaster in lizard form that breathes fire.  There's just a whole lot of people sitting around talking about life and love and stuff, you know?

You can't even give them credit for using a variety of artists.  Cirsova, with one artist shows just as much variety as Asimov's does with (presumably) eight of them.  All eight covers of Asimov's could be done by the same artist.  They have the same technical quality and evoke the same listless acceptance of the same old stories set in the same old new worlds.

I'd argue Cirsova has more variety given that its four issues feature three different figure perspectives.  Two feature full body characters painted from overhead, one a three quarter figure from below, and the most recent features a head and shoulder shot of a woman.  This is a great way of subtly reminding readers that Cirsova includes stories written from different perspectives.

The only thing I see that is consistent across the first four covers of Cirsova is that all four are fantasy.  They have yet to feature a sci-fi cover.  That seems like a glaring omission for a magazine that features plenty of adventure off-planet.

So mark me down as a suitably chastened fan of Jabari Weathers.  The Cirsova covers have continued to grow on me over time, and I'm eager to see what the fifth issue of Cirsova brings to my mailbox.

[Edit to add:  After writing this post, my thesis was independently confirmed by the Barbarian Book Club.]