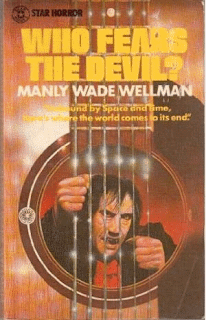 Apparently I spoke too soon on the whole, "Who Fears the Devil" thing.  Having finished the book, it's far more than just a string of creepy Appalachian monster tales.

For one thing, the book builds as it rolls along.  Every few tales John Silverstrings gets a little more detail added to his description.  When he confronts later supernatural creatures, he uses knowledge learned from earlier confrontations.  John as a character gets a little deeper and a little deeper with each story.

Note the word 'confronts' in the previous paragraph.  This isn't a monster hunter book.  Sometimes John fights monsters - he literally punches them in the jaw.  Sometimes he watches while the monsters deliver some much needed justice to a well deserving scoundrel.  And sometimes John even redeems the monsters.  In at least one case he fixes the monster by fixing the monster up with a wife.  You wouldn't see that in today's pink-slime sf/f.

I use the term 'monsters' loosely.  Some of these supernatural creatures are true monsters, some are lost wayfarers reminiscent of Lovecraft's Elder Things, and some are humans corrupted by power.  The classic evil witches and sorcerers in this book are all different from each other and feature some fairly Lovecraft-esque degeneracy, but they are all monstrous in their own way.

The best part of this book, though?  It's a very uplifting book.

Numerous passages proclaim that the night cannot stand against the day, and even though it is never quoted, the reader is frequently reminded of the passage in the Bible that the gates of hell cannot prevail.  Going into the book, I had thought John's silver string guitar would be the magic +5 weapon that solves everything, but more often than not it was a non-entity.  Sure, the silver helps.  Sure, the songs of hope and light can drive back the darkness.  But most often, it was John's simple goodness that guided him down the right path and allowed him to withstand the hurricanes of evil power.

During this haunting season, its nice to be reminded that the monsters have their own fears.  Even the devil himself flees before the light.  It's great sustenance for the soul in a time when Hollywood is falling all over itself to tell the world that all is darkness and life in meaningless and sometimes monsters kill regular people for no reason and there's nothing - nothing! - you can do but accept the cold harsh truth of existence and the futility of trying to do right by others.  It's hard to imagine a book like this being made by the bleak people of Hollywood.  It's just too darn hopeful.

Even in cases where Hollywood allows for some victory, it must always be transitory.  Witness the long dénouement of the current monster movie golden child - Stranger Things.  Yes, the monster is defeated, but only at great cost.  And!  It planted worm babies in Will's stomach with it's throat-dong, so it's got that going for it.  Seriously, did nobody else notice that this program showed an alien raping a ten year old boy's face and impregnating the kid in the process?  Fun for the whole family!

Getting back to Manly Wade Wellman...

And the romance!  There's actually a lot of romance in this book.  A touch of it with John in fine episodic television style, but mainly the romance is between the people John encounters and aids.  It's all very chaste and very suggested.  Not suggestive, just suggested.  It isn't overtly in your face, but tasteful and pleasant and...well, romantic.  It stands in stark comparison to what passes for romance in the few Magic Girl books I've read.

Really, it's hard to know where to end this post.  There's so much right with this book that I wish I could remember who recommended it.  I'd really like to thank them for several hours of fun reading, and a bunch of supernatural tales that didn't leave me wanting to take a shower to rid myself of the clinging stink of evil.
Posted by JonM at 1:00 AM

Email ThisBlogThis!Share to TwitterShare to FacebookShare to Pinterest
Labels: grown up book report