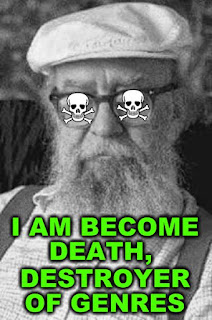 The Pulp Revolution loves itself some pulpy fantasy and science fiction.  It's currently undergoing a long and protracted conversation about where exactly the genre took a left turn for the worse.  There are a lot of theories and finger pointing, with some rather elegant defenses of particular styles.  Loud mouth zealots make grand, sweeping gestures, then retract a bit when others point out exceptions.  Writers and editors of yesteryear get smeared and then have their reputations rehabilitated.  For example, Karl Gallagher's erudite analysis of Campbellian sci-fi softened my stance on Campbell.

With the exception of the New Wave authors.  Aside from a few gems in the cesspool, nobody likes those guys.

Of course, as readers and open minded sorts, the Pulp Revolution looks outward and analyzes information from other sources.  Whether it's showing respect to somebody like Rick Stump for his excellent analysis of why Hollywood can't get Conan right, or mocking the mockable mockeries of analysis like this prize pig, everything is fair game and nothing is off limits.

A number of commenters have pointed fingers at Damon Knight, the man who founded the SFWA and who is most famous for writing a story that ends with a man shouting that "To Serve Man" is a cookbook.  I hesitate to name names, because I'll forget to mention one or get those mentioned in trouble, but "Cirsova" Alexander and Nathan Housely are the primary culprits here.

Intrigued, I started doing some legwork, and everything fits together nicely nicely, thank you very much.  Damon Knight was a mid-tier author who bullied his way to the top through hubris and vindictiveness.  He did everything he could to assume command of the genre from writing amateur and biased reviews (Really, Damon?  Blish is a great writer and Robert E. Howard a hack?  Yagottabekiddingme,) to starting workshops to teach gullible writers "How it's really done", to founding the SFWA and conveniently serving as its first president, the better to determine who really counts as a 'the right kind of author'.  Of all of the gatekeepers who have made science fiction worse over the years, he was the original and so far as I can tell, the worst of the lot.

I started compiling notes and putting the pieces together, and have been forced to change directions a few times during this process.  While my overall thesis has not changed, certain pieces needed to be shuffled around, and looked at in new contexts.  As new information comes in, and as the conversations continue, I expect other changes to occur as well.  I will probably even post a few chapters here for open criticism and stress testing before declaring it ready for prime-time.

Right now the analysis clocks in at about 8,000 words, and it looks like I'm about half-way done.  So expect a quick read sometime in April/May.  Right now, I'm not sure where it will wind up.  Stay tuned, I'll keep you posted.